Rainy Season in Yangon – The Beginning of Burma

I could imagine the pagoda-filled landscape spreading the nation like randomly dispersed, sometimes gaudy, golden bells filling even the most remote village. A place that seemed so distant and unattainable (due to political and cultural battles), when I first studied it in my Southeast Asian courses 7 years prior. I finally arrived to the destination I had been longing for for a while now– Burma, otherwise known as Myanmar.

The ride from the airport consisted of about an hour of weaving through stray dogs, locals attempting to cross the road, piles of trash, and traffic congestion, not unlike other large cities in Southeast Asia. However, the unusual, decrepit buildings, dating back to the British colonial era, made you forget what continent you were on for a moment. As I exited the taxi, I was quickly reminded of reality. The scents of fried batter, human feces, exhaust fumes, garbage, and curry mix the “fresh” air and suddenly I remembered I was in Southeast Asia.

The first thing that I noticed in Myanmar’s largest city, weren’t the temples but the long “skirts” that ended at both genders’ ankles. The longyi, similar to the Javanese sarong, wrapped the women snugly and the men had an added decoration in the front that resembled a fancy bow on top of a Christmas present. The styles and patterns varied. Some had checkers, stripes, some solid colors, and others had floral markings. I was told that traditionally red was used as it is the color of bravery. It is brave to think that your longyi won’t fall off at any given moment. Do as the locals do and adjust every five minutes. After all, it is just a piece of cloth being tucked into itself, but does provide easy access for squatty-potty use.

The formal capital city is widely known for the Shwedagon Pagoda, one of the most iconic Buddhist sites in Myanmar, if not the world. Burma houses the world’s most precious gems – gold, diamonds, rubies – and they can all be found immaculately spread around the complex, whether on top of stupas or within Buddha images. Legend states that eight strands of Buddha’s hair was built in the main Pagoda. Maybe that’s why foreigners have to pay an 8000 Kyat tourist fee upon entering, not including taxi fees from the center of the city running about 4000 Kyat, plus driving inside the gates costs an extra 200 Kyat.

To me, being forced to pay for religious sites that are currently being used seems quite sac-religious, but that’s a topic for another time. When I asked the woman on reception the specific reason for the entrance fee, I was told it was to “protect our shoes”, as you have to take them off when entering any temple or house in Burmese tradition. Not for restoration purposes or upkeep, not for the monks’ meals who worship here, but for shoe protection? I almost wish she lied to me.

As soon as we paid and took a few steps up the stairs towards the Pagoda complex, the loud rumble sent a jolt of vibrations to my heart. Since May was the start of the wet season, the thought was it would be cooler with less crowds. Of course a little sprinkle here and there would be fine, but in Yangon, when it rains it floods. Typical.
The rain flooded the complex with the force of the Irrawaddy River. Attempting to walk through the knee-deep (shin-deep on someone of normal stature), murky water to get my money’s worth, I could feel my feet slipping underneath me. This was about the same time I had to avoid the “Wet Floor” signs floating in my direction. The main Pagoda was still trying to shine with all its golden might, but it quickly became misty. At this point, any light that was peaking through the clouds was fading and any part of my attire that was waterproof, didn’t live up to its name. 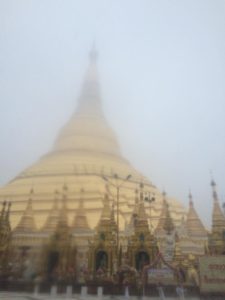 A foggy view of the Shwedagon Pagoda

The pouring rain didn’t stop after fleeing the Shwedagon Pagoda and finding a taxi proved to be difficult, as it seemed no one wanted to drive in the wet weather. I understood why once overpaying for a ride. As we drove, the rain grew heavier, pounding on the roof of the car. The driver decided this was a good time to cut the air conditioning; the humidity sunk in. When looking out the foggy window, the water level on the streets kept rising and it was waist deep on some women. Panicked, I looked to the driver for some guidance, but his reaction was cool, making phone calls to friends and spitting betel saliva out the window. I tried to convince myself, “I’ll only freak out if he does.”

As we submerged ourselves deeper into the flood, a bubbling from below the car crept up and water filled the floor. The engine was working hard to keep running and the fumes filled our lungs. Again, looking at the driver for some support, he just rolled down the window to spit more betel. A sense of relief hit me as I witnessed others passing us in lower cars. What seemed like hours of wading through the water was probably only thirty minutes.

Day one of Yangon was enough to make an impression on me for the whole rainy season in this country. If this is only the beginning, Myanmar must have a lot more excitement waiting.

Have you experienced some flooded adventures on your travels? Any comments on travelling through the monsoon/rainy season?